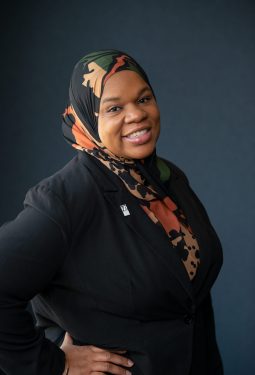 “I became a Neubauer fellow to continue to grow my craft in support of my students and the community I serve.”

Prior her role as a Regional Schools Officer, Naeemah served as the principal of Hardy Williams High since 2017. Under her leadership, the percentage of students passing the biology Keystone Exam increased by 20%. In the 2018-2019 school year, Hardy Williams met end of course Keystone goals in literature, algebra, and biology. In 2020 and 2021, Hardy Williams earned the College Board’s AP Computer Science Female Diversity Award for expanding young female access to Advanced Placement Computer Science Principles (CSP).

Naeemah has been an educator since 2004. Prior to becoming a principal, Naeemah served as a math and technology teacher for grades K-11 and an assistant principal of math and science. Naeemah received the MACCS Award of Excellence in 2014. Naeemah grew up in Philadelphia, PA.